WANADA’s 2021 Annual Meeting & Luncheon, the first large, indoor gathering of the membership in nearly two years, was a resounding success.  Over 200 dealers and kindred-line members came together at the Ritz-Carlton in Tysons Corner, VA this past Thursday to shake hands, share pandemic stories and hear remarks from former White House Press Secretary Sean Spicer.  All agreed that it was great to get together in person again to see old colleagues and celebrate the thriving retail automobile business. Click here for a photo gallery from the event. 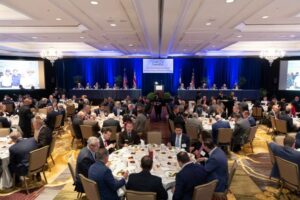 The day’s festivities began with a reception at 11:30 a.m. “It feels great to see everyone in person,” said WANADA President & CEO John O’Donnell.  “You simply can’t replicate human interaction on a computer screen.”  That sentiment seemed to fill the ballroom foyer as the smiling attendees arrived and greeted one another.  With a sellout, capacity crowd, the foyer soon began to fill, and it became harder to move throughout, but the crowd hardly seemed to notice.

Once the ballroom had opened and the gathered dealers took their seats, Mr. O’Donnell welcomed everyone and noted that, in a time of national disunity, it was important to remember that one of the nation’s founding principles was “united we stand.”  With that, the crowd stood for a rousing rendition of The National Anthem by veteran vocalist Michael Ryan, which was greeted with thunderous applause.

WANADA Chairman Kevin Reilly of Alexandria Hyundai & Genesis then took the dais, offering his annual address in the form of a David Letterman style top-10 list.  Rather than humorous cultural observations, however, Mr. Reilly’s list focused on gratitude.  “As Cicero once said, ‘Gratitude is not only the greatest of virtues, but the parent of all the others,’” remarked Mr. Reilly.  Some items on the gratitude list included WANADA’s leadership, from former president Gerry Murphy, immediate past chairman John Bowis, and current President John O’Donnell and his staff, to the charitable spirit of the dealer community, who continue to be “incredibly supportive of our communities, making lives better for all Washingtonians through their charitable efforts.”

After Mr. Reilly’s address, the floor was given to Immediate Past Chairman and Chairman of the Nominating Committee John Bowis of Chevy Chase Acura.  Mr. Bowis explained the makeup of the Nominating Committee and said that two members of the Board had completed the maximum number of terms and would be rolling off: Lou Cohen of Priority 1 Auto Group and Melanie Funkhouser of Fair Oaks Chrysler-Jeep-Dodge-RAM.  He thanked Mr. Cohen and Ms. Funkhouser for their many years of excellent service to the dealer body.  He then presented the membership with the nominations to replace them: Damon Lester of Nissan of Bowie and Jim Willard of EuroMotorCars.  He asked the membership for a vote of acclamation to accept these nominations, which were affirmed unanimously.

Among the other items to be grateful for, Mr. Reilly had made special mention of having a father who showed him the ropes in the car business and in whose footsteps he had the opportunity to follow.  This point became all the more relevant when, following the vote, Mr. Reilly “passed the gavel” to incoming chairman Chip Doetsch. While Kevin Reilly had followed in the footsteps of his father Don at Alexandria Hyundai, Chip Doetsch likewise took over the family business, Apple Ford in Columbia, MD, from his father George.

In his first official act as WANADA Chairman, Mr. Doetsch introduced the day’s keynote speaker, former White House Press Secretary Sean Spicer. In addition to sharing his thoughts on the current administration, the 2024 presidential race and personal anecdotes from his time in the White House and even the show “Dancing with the Stars,” Mr. Spicer entertained the crowd with insightful and personal political commentary. Overall, Mr. Spicer’s political comments were remarkably balanced.  While he criticized the Biden Administration for certain policies and appointments, he also added, “I don’t believe anyone [in the Biden Administration] is seeking to harm America or Americans.  While we can disagree on matters of policy, we should not seek to disparage their character or intentions.  They believe in what they do.  As a Republican, I just happen to think that there’s a better way.” United we stand, indeed.

While some photos of the day’s events are included in the article, you can view a full gallery of 75 photos from WANADA’s 2021 Annual Meeting by clicking here.

The 2021 WANADA Annual Luncheon was generously sponsored by the following: