Reformatted as a dinner for the first time in recent memory, the 2022 WANADA Annual Meeting was, by any measure, a smashing success.

“We wanted to change it up and present the Annual Meeting in the style of WANADA’s Centennial Dinner a few years back,” said WANADA CEO John O’Donnell. “Our intention was to have a dinner with special entertainment every few years, but after the feedback we’ve received, we might just do this every year!”

The event, which was held at Columbia Country Club in Chevy Chase, MD, began with cocktails at 5:30 p.m. The room quickly filled with over 200 dealership principals and senior managers saying their hellos and examining the $6,500+ diamond earrings that were being raffled to benefit the Automobile Dealer Education Institute (ADEI). Right at 6:30, the chimes rang and the doors were opened for the main dining room.

After a brief welcome from John O’Donnell, dinner was served, during which the guests were treated to an informative and entertaining presentation from keynote speaker Glenn Mercer. Mercer, a well-known automotive industry analyst, regaled the audience with insightful facts on the future of automotive retailing, punctuated with his remarkably dry wit. Mercer encouraged the gathered dealers to not buy into the hype of Wall Street or so-called industry “disrupters” that see the future of car selling as factory direct, and instead provided data that strongly indicates the franchise system as the best sales and service model for American consumers. Mr. Mercer also pointed out that the biggest growth area in a dealership is the service department and provided some broad insights into how market share might be reclaimed from the aftermarket.
Following the keynote address, WANADA Chairman Chip Doetsch of Apple Ford in Columbia, MD, delivered a “state of the association” address. Mr. Doetsch referenced the recent challenges surrounding the COVID pandemic and global supply chain as a “laboratory” in which the franchise system was proven remarkably durable. As such, he continued, the impending challenges dealers face from overreach at the federal level, while daunting, would ultimately prove dealers’ resourcefulness and ability to overcome even remarkable hurdles. Chairman Doetsch applauded WANADA’s leadership for their continued advocacy at the state, local and federal level, and called upon the dealers to increase their support of the association’s activities. Such a robust slate of member services and political action, he explained, comes at a cost. By supporting the association’s insurance business and advocating on behalf of the Washington, DC Auto Show with their respective OEMs, each dealer can play a part in keeping the industry strong. Chairman Doetsch then closed his remarks by noting that the dealers in attendance were clearly among the engaged and asked that each attendee reach out to a fellow dealer who was not fully engaged with WANADA and seek to bring them along.

Following the Chairman’s Address, Immediate Past Chairman Kevin Reilly of Alexandria Hyundai and Genesis took the podium to commence the business portion of the evening. Reporting from his role as Chairman of the Nominating Committee, Mr. Reilly noted that Robert Farrell of Penske Automotive and Jim Gramm of Safford Auto Group had each completed two terms as Directors and would be rolling off the Board. After thanking Messrs. Farrell and Gramm for their service, Chairman Reilly continued that the Committee had nominated Bill Colgate of Jaguar-Land Rover of Annapolis and Melody Lesane of RRR Automotive as Directors in their place. The new Directors were then officially added by vote of acclamation.

Once the business of the evening had been attended to, guests were treated by a highly-entertaining set of stand-up comedy from Daily Show alum and Gutfeld regular Tom Shillue. Shillue had the crowd in stitches as he recalled seemingly offensive 70s jingles and his humorous take on the challenges of raising daughters in the midst of “woke” culture. To close the evening, Tom Parsons of B&R Associates raffled off the aforementioned pair of diamond earrings to one lucky attendee, who was thrilled to be the winner considering his wife’s birthday was just around the corner!

WANADA would like to especially thank the support of the generous sponsors who helped make the 2022 Annual Meeting such a smash hit: BG Crovato Products & Services, Chesapeake Contracting Group, Citrin Cooperman, Penney Design Group, The Keats Group at RBC Wealth Management, and Truist. 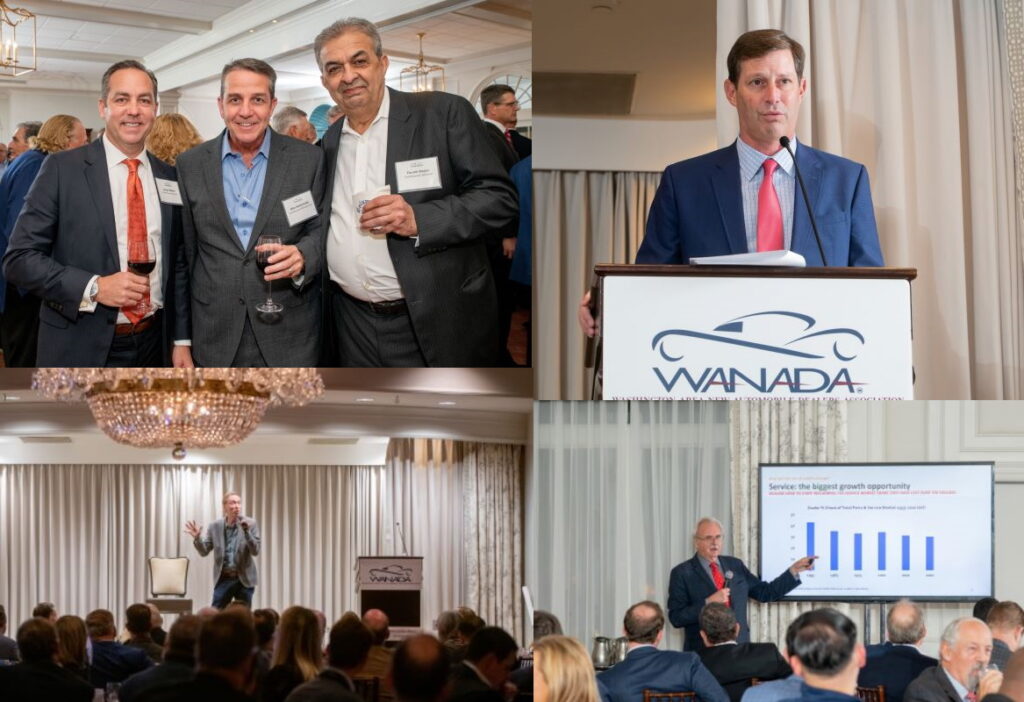