Sam Weaver, Vice President/Partner of Chevy Chase Acura, and his wife Linda, hosted an event at their home on Monday evening, September 27th, to support the campaign of David Blair for Montgomery County Executive.  Mr Blair, a businessman and philanthropist who finished just 77 votes out of the money in the 2018 Democratic primary for Montgomery County Executive, announced in March that he plans to run again in 2022.

Several WANADA dealer members, along with members of the WANADA staff, attended the reception.

In his remarks to the attendees, Mr. Blair emphasized his strong leadership skills and his plans to support the police in a county where crime has increased drastically, including auto thefts, which are up 300%.

For more information on David Blair, or to support his campaign, please visit www.blairformontgomery.com.  The David Blair for County Executive campaign will also be hosting an open house and campaign office grand opening this Saturday, October 2nd, from 9:00 am to 12:00 noon at campaign headquarters located at 11751 Rockville Pike, Rockville, MD 20852. 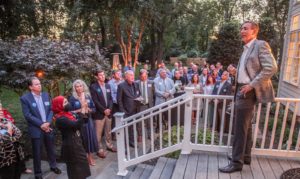